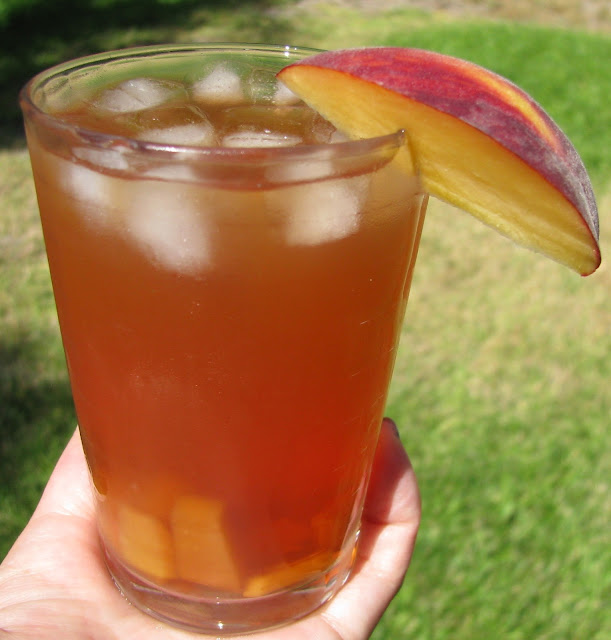 Yeah...my hand must do for a surface because I don't have a nice wooden table or something I can use outside (natural lighting is the best) in this here town. Anyway,...this is very simple & easy. I don't have exact measurements because I didn't measure anything & people have their own preferences for how strong they like the tea, how many peach chunks you want, and how much sugar you like in it. Here are my estimates: 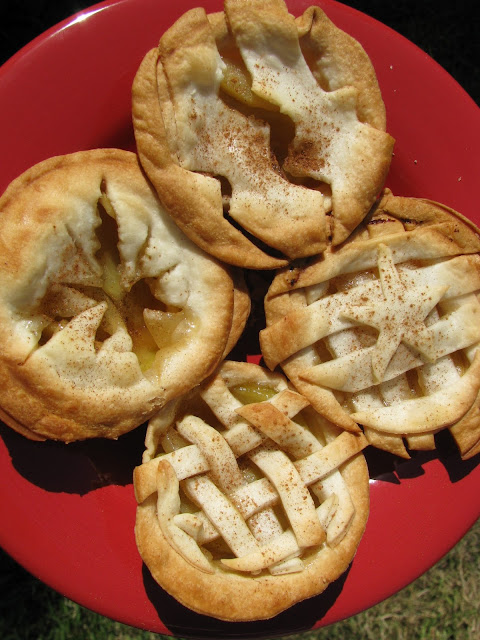 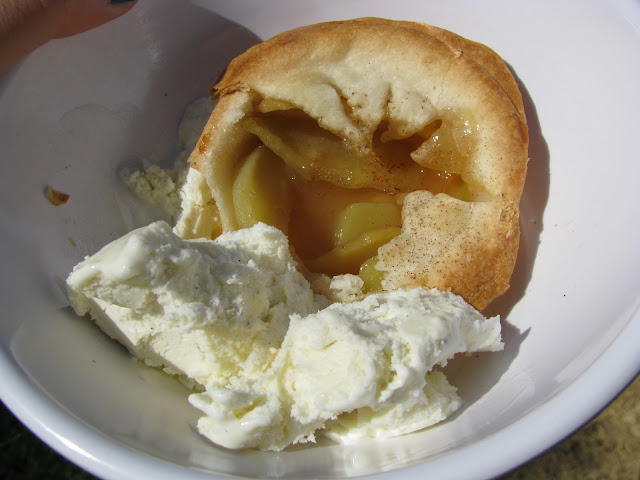 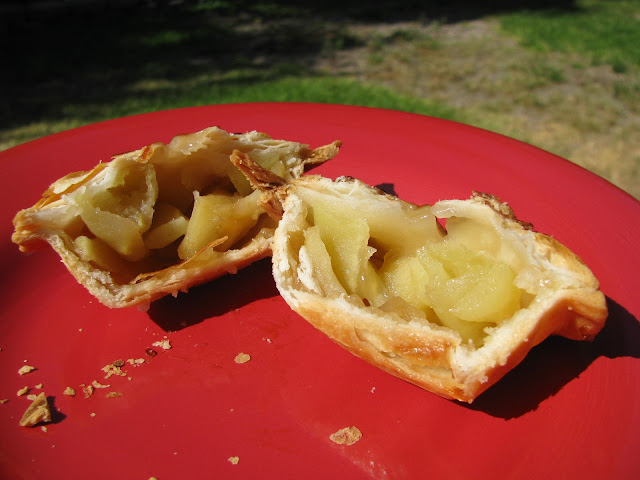 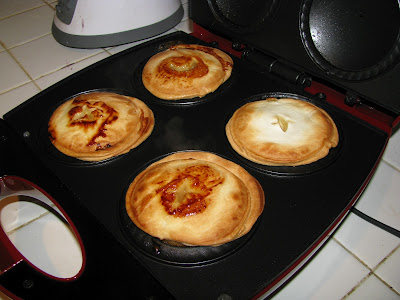 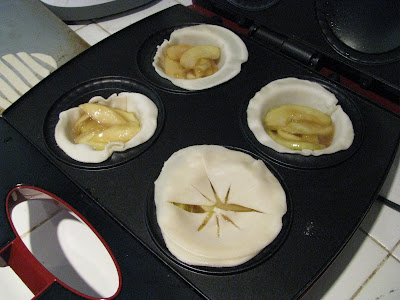 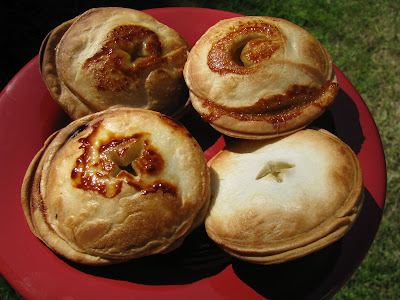 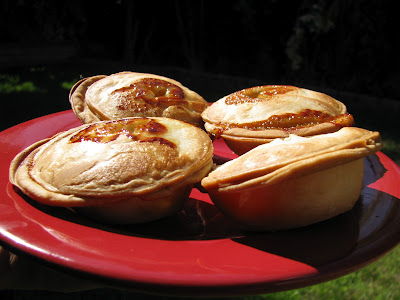 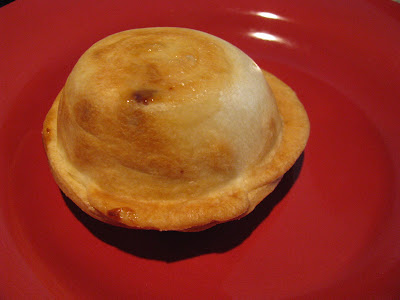 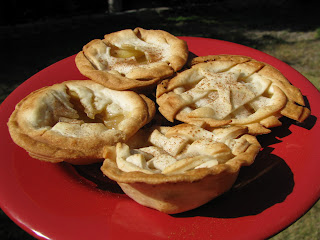 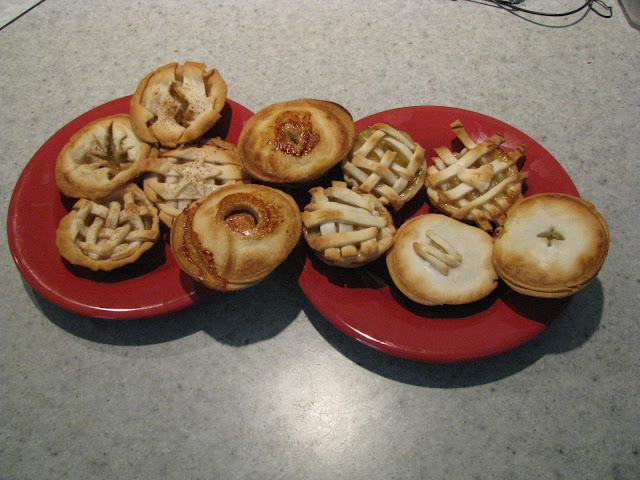 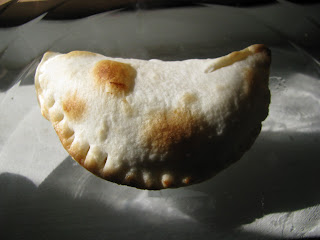 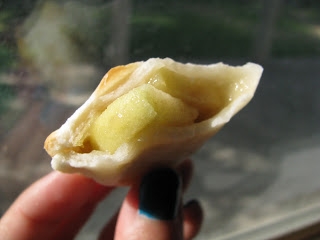 Mini Apple Pies
Recipe from AllRecipes (I just copied and pasted this time directly from the site), but we had a lot of leftover filling since we weren't making a full pie. We're planning to use the leftover insides in our oatmeal and other things. 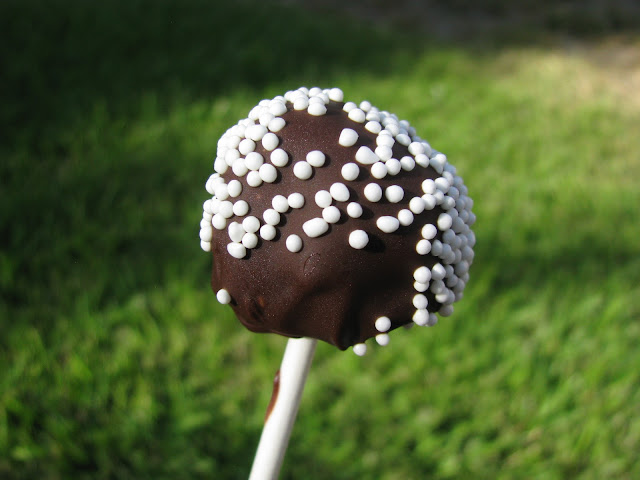 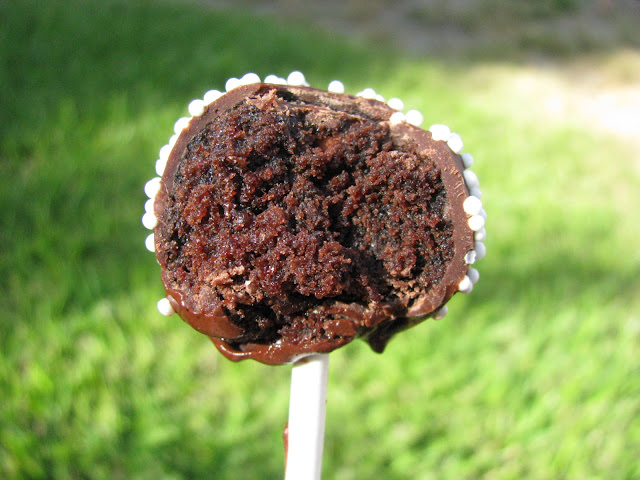 They're easier to make than cake pops because they're thicker than cake and, therefore, do not require you to mix in frosting (although some people do incorporate it for more fudgy-ness). I had no problems with the brownie balls falling apart, and I honestly think they taste better than the cake pops I've tried, although red velvet cake pops with real homemade cream cheese frosting are soo good. I'm posting on that soon.

Tip: If you don't want the flaky top layer of your brownies included in the balls (that makes it kinda chunky and interesting...), scoop off the top layer after cooling and then make the balls.

Ingredients/materials:
- brownie mix or baked homemade brownies
- chocolate chips - we used semi-sweet
- lollipop sticks (got mine at Michael's, but they're also online and at Jo-Ann Fabric and Craft Store)
- sprinkles (or whatever topping you want)

(1) Make some brownies (1 batch is plenty, & the boxed stuff is fine. I've found that brownie mixes tend to be delicious)
(2) Cool the brownies completely
(3) Mix the brownies together (no need to cut them!)
(4) Form them into balls
(5) Melt chocolate chips
(6) Put one end of a lollipop stick into the melted chocolate
(7) Stick the stick (haha) into the brownie ball about halfway through the ball
(8) Freeze the balls for about 10-15 minutes on wax paper on a flat pan or cookie sheet
(9) Dip the cold brownie balls into the melted chocolate chips (you may need to reheat them)
(10) Gently tap each stick against the rim of the cup/mug/bowl/whatever of melted chocolate so that the chocolate coat is even and less thick (unless you want it goopy and uneven) and until the chocolate layer covers the brownie ball all over
(11) Stick the pops in a Styrofoam block so that they are standing up and aren't getting flattened. Another option is to use the holes of a colander, which is what Grace and I did this time.
(12) Cool the pops in the refrigerator

Here is a step-by-step video made my Bakerella, who made cake pops famous. Follow the same steps but use brownies instead and ignore the frosting parts. Here's another decorating idea where you just dip the top half of the ball in chocolate and then the very top in sprinkles. 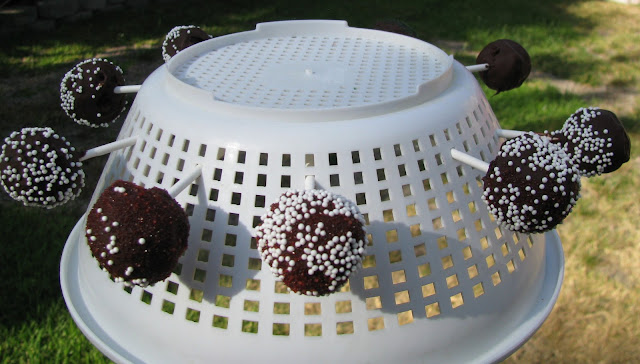 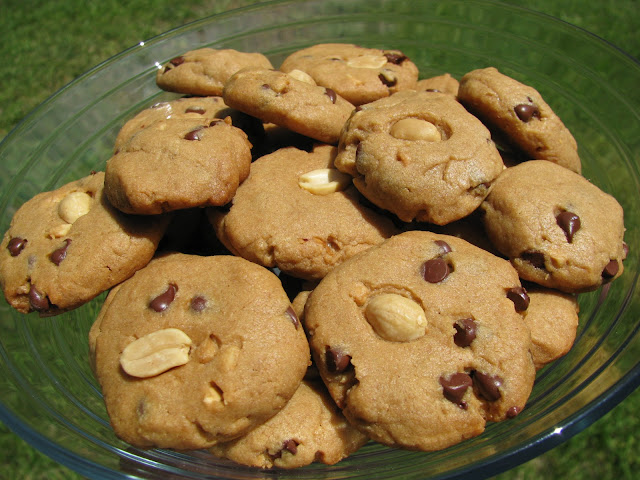 Whenever I read a title like this for a recipe (anything with "the best," "amazing," etc.), I immediately want to try it. My housemates (Grace & Catherine) and I made this because it seemed easy, we were craving cookies, and we had the ingredients (excluding the peanut butter chips). I definitely agree that these cookies are DELICIOUS, and I think they'd taste great with peanut butter chips! I hesitate to agree with the "best" part only because I haven't tried many peanut butter cookie recipes. I do love them though and will remake them probably many times.

(1) Preheat oven to 350
(2) Line baking sheets with parchment paper
(3) In a large mixing bowl, cream together the peanut butter & butter. Once combined, beat in the white sugar & brown sugar until well blended. Beat in the egg, milk, & vanilla
(4) In a large bowl wisk together the flour, baking powder, & salt. Gently add to creamed mixture & mix until almost combined. Fold in chocolate & peanut butter chips. Chill dough for at least 15 minutes
(5) Roll tablespoonfuls of dough into balls. If you want, gently roll  dough balls into sugar & place dough balls on parchment lined baking sheets. Press each ball with fork tines to create a criss-cross pattern (Careful - these cookies crumble if they're not smooshed together nicely; you must press them down so they cook through evenly)
(6) Bake for 8-10 minutes or until edges are lightly browned
(7) Remove from oven & cool on baking sheets for 5-10 minutes until they're sturdy enough to be transfered to a wire rack to cool completely
at 12:09 PM 2 comments: 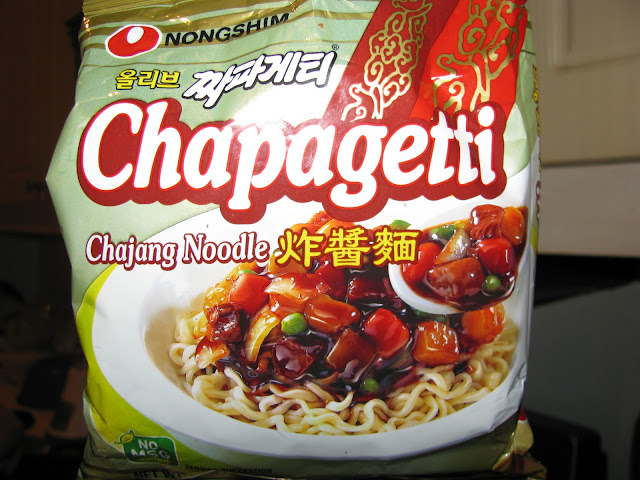 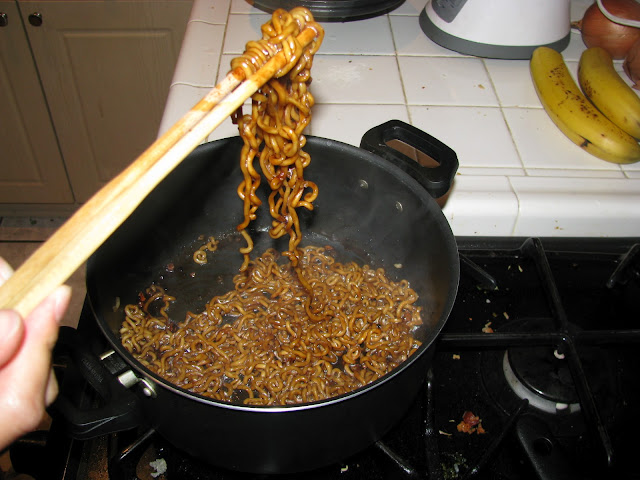 Like I said in my previous post on kimchi soodubu jigae, Grace has been expanding my culinary horizons. I now know what soondubu is, and we also made this chapagetti, which is like a black bean-based noodle dish with vegetables and sometimes meat. I actually had jajangmyeon in Oakland while karaoke-ing during my undergraduate years. The two dishes are very similar, but according to this site, chapagetti is a combination of chajang (fried black bean sauce) and spaghetti. Whatever it is, it's good. I liked this chapagetti more than the jajangmyeon because it was less goopy. I'm happy I can add this to my list of things to make!
at 12:30 PM No comments:

Email ThisBlogThis!Share to TwitterShare to FacebookShare to Pinterest
Labels: Korean 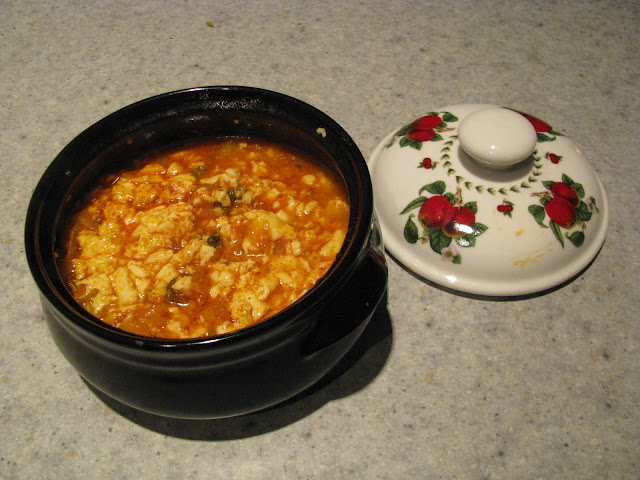 I am not a fan of kimchi but itself, BUT I really enjoyed this kimchi soondubu jigae, which is like a spicy Korean soft tofu stew. It's perfect with white rice! There's something about hot, flavorful sauces with silken tofu over fresh, white rice. I'm all about trying to be healthy, but I just can't enjoy brown rice with anything like this.

Grace, my housemate, has been introducing me to new foods like this and chapagetti. YUM! I love expanding my food horizons. How do you make it? You get packaged soft/silky/silken tofu and add it to the packaged soonjubu base. lol! As far as making it from scratch, I really don't know. I don't want to recommend a recipe if I haven't tried it.
at 12:17 PM No comments: